This board should be in english only and contains everything worth to discuss.
Antworten
11 Beiträge • Seite 1 von 1

I have an aluminum swingarm in my XT500. The chainguide is missing from that swingarm. That was never a big problem but since I'm going to fit taller rear shocks the chain will be a bit looser when the rear is fully extended. So I'd like to install a chainguard.

I had a closer look at the swing and I found the text Profab on the crossmember, just in front of the rear wheel. The text is in thick, large letters and is pressed from the inside-out

After some searching (also on this forum), I've found out that Profab is a wellknown and highly sought after swingarm for the HL500. Anyway.. allthough my swingarm looks a bit different, I still believe that it is a genuine Profab swing.

Does anybody have an idea where I can find a chainguide for this swingarm? Profab itself does not have a website but maybe someone knows where to get parts for these swingarms. An alternative is to modify an existing chainguide (e.g from a KTM EXC or so) by only using the nylon part and folding a thick aluminum plate around it that fits my swingarm.

I don't have the faintest knowledge on the profab-swing arm myself, but posted your question in German language in the "Werkstatt" column of this forum, see -> this thread.

I'll also take care of translating any postings there, provided that you don't read German (which you most probably do, since you wrote that you already found some stuff on the profab swing arm in this forum. Anyway, just let me know if you'd need a translation or if German is fine with you).

On your suggestion of constructing a chainguard by yourself: some members (and in particular "sven" ) did so, even if - to my knowledge - not on a profab swing arm. Their preferred approach was using a castor wheel from a skateboard as contact element to the chain.

or still something different?

Hi,
i`m afraid HL500 is not the right way to look at.
As far a i know the ProFab (also WhiteBros) swingarm was mainly used as a aftermarket tuning pice for TT500 and XT500.
You have to look for these bikes:
this is a WhiteBros Swingarm , looks simular to your Profab

or take look at these TT500 orig.swingarm

by the way: why don`t make the chainguide the way the bike behind yours have ?
Nach oben

Thanks for the information about WhiteBros. I did not know that. It looks exactly the same as my swingarm

by the way: why don`t make the chainguide the way the bike behind yours have ?

Great eye for detail! That is indeed my KTM behind the XT. Today I took a closer look at the KTM chainguide and I think that I can make it fit but it'll take quite a bit of modifying. But it is a possible solution
Kneedown is for pussies...
Nach oben

or still something different?

I mean a chainguide and not a chainguard. And then also the type that only guides the chain and does not tension the chain. So I don't want something like this:

This kind of setup was quite common in the 80's but nowadays you don't see it as much anymore because a simple guide is more reliable.
Kneedown is for pussies...
Nach oben

as you can see I'm using also this very fine white bros swingarm. As a chainguide I'm using a common common white plastic motocross guide which I adapted a little bit. As chaintensioner I took the older XT 500 tensioner from the 77/78 model. 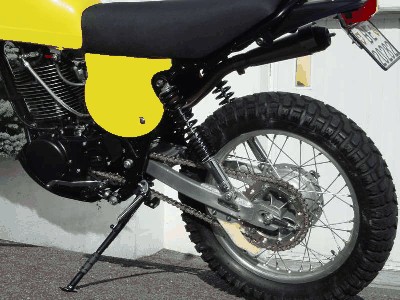 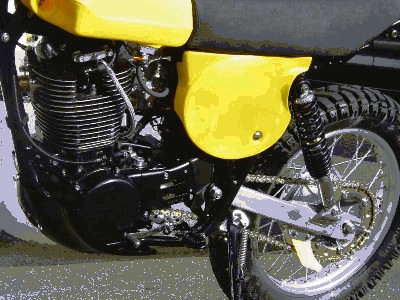 What I like to know is what kind of rims do you have on your xt? The black ones, with yellow writing on?

What I like to know is what kind of rims do you have on your xt? The black ones, with yellow writing on?

Those are Excel rims, probably the best known rim manufacturer in the offroad scene: http://rkexcel.com/
Kneedown is for pussies...
Nach oben